As the HavenCorp Special Board Meeting winds into its fourth tedious hour, Alec wonders when it all began to go so wrong. And not just the meeting. Why did Alec agree to be chairman, anyway, when his skills lie in the lab and not with business and politics? When did he begin to lose control of the company he built with his wife and former best friend from University days? And when exactly did his friendship with Dexter Page begin to suffer?

Alec was never good at numbers and finances, which is what it all seems to boil down to now—and which is also why his partnership with Dexter made so much sense when they were younger. And besides, he trusted Dexter. Dexter was his best friend.

But it’s been years since those tender days of collegiate dreaming, business plans and fundraising, and Dexter has spent those years priming himself well. Alex begrudgingly admits that Dexter deserves to be the next Chairman, that his time has come. Simply put, Dexter has earned it.

Alec and Lianna were the scientists, the brains, the passion behind the HavenCorp vision and mission. But Dexter was the one who could crunch the numbers, create the projections. He had a passion for the pitch. Dexter would enter VC meetings with a kind of feverish excitement, like a hungry kid knowing there’s a chance of having his favorite meal for dinner, if only he played his cards right. And Dexter always knew how and when to play his cards right—and when to keep them close to the chest.

And now that Alec is on the verge of losing control of HavenCorp to Dexter, he hates the feeling of not knowing when it all went wrong, and that Lianna would be so very disappointed.

“We are making the world a better place with GAIT. To be more specific—we have already made the world a better place through GAIT,” Dexter says. “But I’ll remind the Board that we are not a nonprofit and these advances for the greater good have come at a great internal cost. We are still a young company, and our competitors have had deeper pockets to begin with, on top of not having had to finance the research and development that the Doctors Haven so brilliantly spearheaded for us. Now let me be clear that I don’t regret one single penny spent on that R&D—but there’s only so far and so long that surgical implants and patents are going to protect us…” 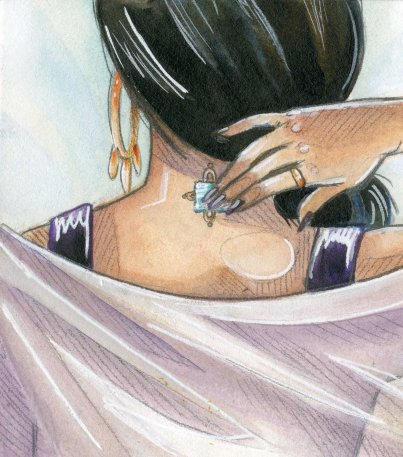 Alec studies Dexter’s face as he addresses the board—its hard lines, prematurely aged through toil and determination, and perhaps something more mysterious too. It’s not a harsh face per se—but it’s also not difficult to spot the fierceness lying in wait behind Dexter’s eyes. It’s a face of contradictions, one that’s hard to read. A good quality for a Chairman. But it makes Alec wonders if they ever really were friends, or whether there friendship was always an elaborate ruse, a game.

After all, their friendship began with games. Alec almost laughs out loud to remember that he met Dexter in college at Gamers Club—that both of them showed up to that first meeting thinking the club would be a good place to meet girls. It wasn’t. But they did meet each other, and that meeting would sow the seeds for what would blossom into one of the most powerful companies in corporate America.

Although a girl did enter their college lives, of course—Lianna was the spark that truly lit the HavenCorp vision.

Alec is drawn out of reverie when he hears Dexter say—

“A partnership with the DART could provide us with a guaranteed stream of funds.”

“Wait a moment,” Alec interjects. “DART? You’ve been negotiating with the military?!”

He’s stunned. And as he searches for reactions from the other Board members, Alec realizes he may be the only one who is. Is it possible that he could he have been so blind to this development?

“Not negotiating. Just building a relationship,” Dexter explains, “with the Minister of Defense. Exploring a theoretical deal.”

“A theoretical deal. And what would the Department of Advance Research Technologies get in return for their money? In theory.”

“A first look at our tech, obviously. Some kind of right of first usage.”

“In other words, the government would have first crack at turning my research into weapons!”

“It’s not your research. It’s company-owned research. It belongs to all of our investors.”

That comment elicits a wave of agreeing nods all around the table—like a happy crowd’s hands waving their way around the arena at a sporting event.

“No. For one, the Minister is an outspoken champion for using Grid tech to combat PTSD in combat veterans.”

“That’s nonsense. Everyone at this table knows that’s just good PR and low-hanging fruit. DART won’t give us significant funds unless they think they’re going to get weapons out of it. And we agreed that we wouldn’t take military money!”

“That was a philosophical agreement made when we didn’t need military money! But we’ve exhausted individual high net worth options. And I’m sure our VCs will agree that additional venture money is not going to be forthcoming.”

That gets another wave of nods.

Alec looks around the impossibly long table in the HavenCorp conference room and at the robotic lineup of nondescript men-in-suits, venture capital-placed Board members like a lineup of bobblehead dolls. He tries to remember when exactly the Board became dominated by these suits, but he can’t place it in time. He desperately wishes he could just ignore them and got back to PL1, to focus on uncovering Lianna’s last research and discoveries.

“If I may address the Board,” Alec begins. “As you know, confidentially, we are close to identifying and harnessing GAIT applications that I believe can halt the aging process. This is a path to increasing not just lifespan but healthspan—it will give each human individual not just more years, but more of their productive years. Certainly we can all agree that such an achievement will be not just significant for the history of all mankind… but will be financially lucrative.”

“Indeed!” Dexter jumps at Alec’s words. “If we actually have those applications in hand, and if we monetize them immediately, before a competitor makes the same discovery and beats us there. That’s a lot of if’s. So let’s break this down step-by-step, so we can understand exactly what we’re talking about. First, Alec, as Chief Scientist, please tell the board. Do we have those findings? Can we begin work on an Immortality Engine?”

“Well no. Not yet. But before her accident, Lianna made a breakthrough and I just need some more time to—“

“Right. And even if you had those findings—which you admit you don’t—and we could begin the engineering phase—which we can’t—would you be in favor of monetizing her discovery immediately?”

A pause, during which you can almost hear a bead of sweat descend from Alec’s furrowed brow, before he responds…. “No.”

For the first time all day, chuckles are heard around the table. And Alec has no choice but to dampen the mood—

“I’m confident that I will soon have all the data necessary to begin engineering designs for an ‘Immortality Device’ as you put it… But it wouldn’t be responsible to take it to market right away. We’d need to study all aspects of its operation far more deeply. We’d need to consider a whole host of implications. And not just scientific implications—moral, religious, socio-economic, and so on. It would take some time.”

“Well we don’t have time! As the saying goes, ‘time is money’. A deal with DART would give us both.”

And Dexter pauses here. Alec can almost see him reach into his coat pocket to pull out those figurative cards held close to the chest… Dexter seems to have been waiting for this moment.

“Alec. You want more time. You’ve admitted you don’t have all the answers yet, but are close. We might be able to use those answers to bring Lianna out of her coma. To help save her life! She’s not just your wife—she’s my friend, and she’s HavenCorp’s other Chief Scientist. We all want her back. Don’t you want that, too?”

“Then even you must agree! I move to immediately begin negotiations with DART on a long-term partnership.”

Alec can’t even tell which Suit began the next wave of nods, but the motion is rapidly seconded and rapidly voted in favor by all but Alec.

“Excellent. I’ll work with the Minister of Defense on basic points and craft a termsheet for the attorneys to work off of,” Dexter affirms. “So may I suggest we adjourn this special meeting of the Board, and reconvene in two weeks when I’m sure I’ll be able to present terms for discussion… right after Board elections.”

Board elections. When Dexter will become the new Chairman.

“And if I can also bring the board something definitive in two week’s time,” Alec hastily interjects, “Something that could leapfrog our advancements toward an Immortality Engine without needing more money—I’d like us all to reconsider getting into bed with the military.”

There are a few grunts of possible approval and Alec knows it’s the best he’s going to get.

And so the meeting is adjourned. What else is left to say?

As they file out of the office, Dexter steps towards Alex and whispers to him, not unkindly— “I want you to know that when I’m Chairman, I’ll make sure she never gets sent to a sleep farm.”

“What are you talking about?”

“Dexter. Doctors only send coma patients to sleep farms when they’re ready to give up on them.”

“Oh, Alec… Lianna has been in a coma for almost a year. At some point, someone on the Board is going to request that HavenCorp either stop financing her treatment, or that she be sent to a sleep farm…”

And Dexter smiles a smile that Alec cannot read.

“But I will do everything in my power to make sure that doesn’t happen… I loved her too, Alec.”

“You loved her, Dexter? Well I still love her. She’s not dead.”

As Dexter exits, Alec wonders once again when it all began to go so wrong.

Because the games have definitely begun.

Please also LEAVE A REPLY below and let us know what you think– we take our fan feedback seriously! Thanks! – Vivek + Sara 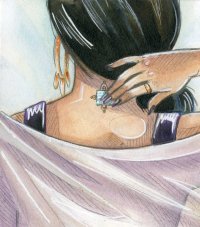 An illustrated YA novel by Vivek J. Tiwary with art by Sara Richard. Serialized here for free-- follow this blog for future chapters!